The Playing Cards and the 2 Jokers 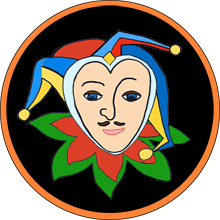 When playing a game of cards, most of the time you will remove the 2 jokers from the deck before dealing the cards.  I find this curious for the following reason:

I'm not actually confused by the question, but it does bring up a good point. In 'The Mystic Test Book', Richmond exposes how the Joker became part of the book of cards.  He talks about the mystic brotherhood and 'some unknown genius' who only a few years earlier invented the Joker, but does not elaborate.  He goes on and states that the Joker takes up 1 and one quarter days, giving him that as his spot value.

What is he saying?  To start, the spot value for a card represents it's ordinal value, meaning 1=1, 2=2, ... jack=11, queen=12, king=13.  Well, it turns out that if you count up the spot values of the 52 cards you come up with 364. Add to that the spot value of the joker and you get 3651/4, the number of days in the year. Apparently it was important to the brotherhood to invent the joker in order to fulfill this purpose.

The Card of the Day

Another interesting feature of including the joker in the deck of cards involves the formulas Richmond used to calculate the card for each day. Using the formulas for calculating the card for the day, the last day of the year comes up with a spirit value of 11.  Looking in the 'ruling cards of time' table you see not one of the 52 cards, but the letter 'J', representing the joker.

All of this seems quite convenient to me, where the joker plays this pivotal role of fudging the formulas used to map the cards to our calendar.  But are we to assume that the inclusion of the joker in the deck of cards was a recent event?  In other words, the Atlanteans didn't need the joker, and all that time up until Richmond's involvement the joker wasn't needed, but for some reason now it is?  Or could it be that the jokers have always been a part of the book of cards, but it was just recently that they were included in the pack of cards that we now play with?

Doing some research on when the joker first appeared in the cards, it appears to have originated when the card game 'Euchre' was brought to America from Europe.  In the American version of the game, a wild card was included which represented the highest trump of the game.  According to the reference, this deck of cards was produced around 1860.  I suspect that this 'wild card' was the joker described by Richmond.  And now that the Joker had been introduced into the deck of cards, the stage was set for the Brotherhood to hand over to Richmond the tables and formulas needed to reflect the 'science behind the cards'.

Once I started down this path of unveiling our friend the joker, it appeared to me that the science behind these cards had not been completed at the time when Richmond was given his formulas and tables.  Originally there was only one joker in the deck of cards, but we all know that now there are 2 of them.  What happened, and how do we now deal with this second joker?  It was already hard enough to make sense of the first joker, especially given that the quadration, the most fundamental process in the whole science, does not have room to accommodate him.  Having a second joker would seem to only complicate things more.  Or does it?  Let's go back to the research.

Looking back at the same reference that discussed the first joker appearing somewhere around 1860, it goes on to say that a second joker was introduced into the deck of cards probably around 1950.  The jokers were both considered wild cards in the game of poker at the time, but could also work together to make a pair in matching games like crazy 8's.  In any case, since then almost every deck of playing cards includes the 2 jokers.  Are we to assume that this second joker is to be as important to the system as the first?  Or maybe, together, they share the responsibility that had been given to the first.  I suspect the latter to be the case, and my suggestion is that the first joker be given one day of the year only, and the second joker takes the extra 1/4 of a day.  After 4 years she has accumulated enough to get an actual day in our calendar, and that day is 'Leap Day'. I consider this to be a very lucky card indeed.

OK, now I see the jokers in better light. Earlier I said that the joker appeared to be a mere convenience; a fudge factor that worked to allow these cards to fan out over the year in a way that mapped their movements over our calendar.  Now I can see that they play a far more pivotal role in our game, and I suggest that they be considered structural components of the framework itself.  Why would that be?  Well, we know that the jokers are not allowed in the deck when we do the quadration, so to me that means that we need to place them as actual fixtures somewhere in the framework.  They would be given positions, but they remain fixed and are not included in the movement of the cards that 'wander about'.

The best part of having positions for the jokers in the framework is that we have a place to put them when we do the quadration.  During the shuffling and cutting phase of the reading they get to play along with everyone else, but they get removed right away once it is time to quadrate.  In the natural order, the big and little jokers hold the final 2 positions. So I suggest that those be the cards to use for the jokers after preparing the deck for a reading.  Just turn the deck upside-down and take first card as the little joker and the second card as the big joker.  Then quadrate the deck. 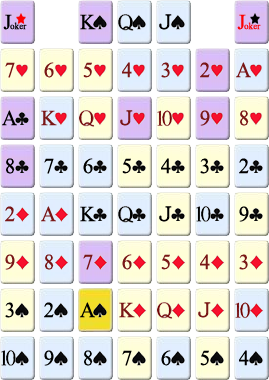