The Playing Cards and Their Ancient Origin in Atlantis

The playing cards represent an ancient symbolic language, handed down to us from our ancestors in Atlantis (see History).   Though the historical record does not identify when exactly the playing cards first appeared in Europe, it is commonly believed that it was in the 13th or 14th century.  However, the esoteric knowledge of these cards reaches much farther back in history, safely preserved by the mystic brotherhood who brought forth the information through their initiate Olney Richmond in 1893.  In "The Mystic Test Book", Richmond was clear in stating that these symbols actually reflected a mystical science, 'the religion of the stars' he called it; the very fabric of which represents a calendar.  Richmond taught that the playing cards have a mathematical basis and can be studied empirically if the student has a grasp of the underlying mathematical principals. Thus, the Mystic Test Book acts as a guide book as it explains the derivation of basic information such as:

Since the theoretical basis for both the natural order and the quadration has already been presented by Richmond, we will not discuss it further (see 'History').  Instead, we will use this information and focus on developing techniques to interpret the nature of these cards in both their static (natural order) and dynamic states.

After careful consideration of Richmond's profound reference, it can be seen that the playing cards operate on 2 distinct levels, relating 2 fundamental principals: 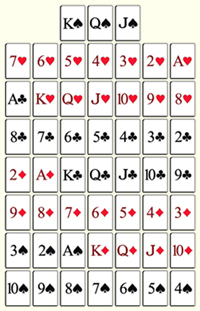 Life is a hologram

Our life is comprised of a series of moments that map out linearly through time.  The ability (and requirement) to move through time is due to the quadration.  Thus, the quadration is a time-keeper, and ultimately a calendar.  In the backdrop of our life as we move through time is the perfect state.  This perfection is always present, though we are often unaware of it's presence, and our place within it.  Contemplating the interaction between the natural order and the dynamics of the quadration will eventually unveil this perfection, which is a prime goal of this work.

In fact, I suggest here that it is these 2 fundamental principals that define the essential mathematics for this card science.  Accompanying the mathematics, we have the framework within which these cards reside.  The framework provides an arena for the unfoldment of life in our dimension.  Each house in the framework is affected by the forces governing the rows and columns, providing a unique environment for the card to fulfill a particular destiny.  There are many layers of information that can be combined in order to attain a deep understanding of the workings of life within the framework, while at the same time a simplified approach can be taken to where only a few factors are taken into account in order to address a particular struggle that predominates.  The mundane and sublime are but endpoints of a bridge that we build as we transform our lives through the use of this science.  It is the study of the movement of these cards through the quadrations, taking into account the dynamics of the framework, that provides the basis for the interpretation of the individual symbols.

Knowing that the quadration is not arbitrary is of great importance, as it proves that our departure from perfection was not meant to be a disruption, or a punishment.  Instead, it is a prime factor in our evolving awakening.  In other words, our apparent departure from perfection was designed to lead us back to what we have had since the beginning.  Our path through these quadrations reveals the experience that we offer to Creator, essentially proving the value of our very existence.  Creator sends us out into this matrix with the intent of being able to experience himself, something that could not happen if we were to remain with him in the perfect state.  We chose to offer this experience to Creator, with the goal of uniting again when the life is finished.  But the ultimate prize is to unite with Creator before the life is ended, and to that purpose I devote this work.