Select The Blog To Display 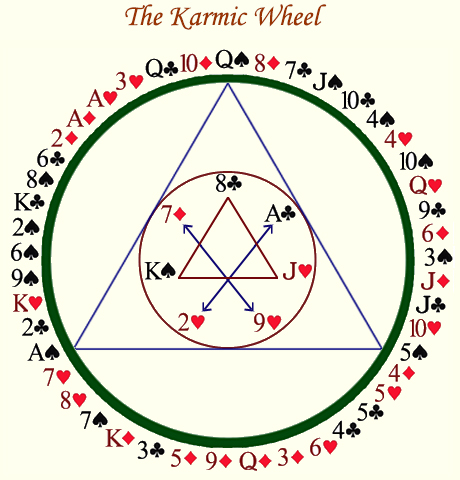 Interaction of the 'alternating' planetary rulers

The diagram of the karmic wheel gives a hint as to the function of the two sets of alternating planetary rulers.  In the center of the diagram are the 7 planetary rulers laid out in a circle, where there is a two-way arrow connecting both the 2 hearts/ace clubs and the 9 hearts/7 diamonds.  The arrows signify that both cards are inseparable, united in some cosmic way.  The three remaining fixed rulers are united as well, this time using the shape of the triangle to signify that they are a trinity.  Let's analyze the alternating sets of rulers.

The 2 hearts/ace clubs polarity is reflective of the division--or union--of heaven and earth.  Mercury represents earth, is played by the 2 hearts and acts as the messenger of the gods.  Jupiter represents heaven, is played by ace clubs and acts as the king of the gods.  These terms are symbolic, reflective of the ancient idea that we cannot approach god directly but can do so indirectly through the scribe, Mercury.  Remember also that Mercury was the only god who was allowed to come and go from the realm of Hades, the underworld.  All others who entered would not be released save through some mythic transformational process.  This is another clue that needs to be expanded upon.

The 9 hearts/7 diamonds polarity is reflective of the division of the sexes, female and male.  Venus as the female is played by the 9 hearts and Uranus as the male is played by the 7 diamonds.  In the beginning, the great goddess Gaia was birthed of her own accord from the void.  She then went on to self-generate and birth the sky father (Uranus), the oceans and the land.  Together with Uranus, Gaia birthed the Titans, the Cyclops and others.  Uranus became tyrannical toward some of the offspring, which greatly disturbed Gaia.  Gaia then sought support from the Titans to prohibit Uranus from having any other offspring.  Only the youngest son, Saturn was willing to get involved.  The plan was devised and enacted; Saturn castrated Uranus as he lay waiting in bed for Gaia.  Blood and semen fell to the oceans and the earth.  From the ocean arose the goddess of love, Aphrodite (Venus), and from the earth arose the furies--three vengeful goddess who torment the unjust.

With these two sets of rulers, the circle is divided twice.  The first division is the upright diagonal, separating earth from heaven.  The second division is perpendicular to the first, separating female from male.  By dividing the circle thus four quarters are created, each containing 90 degrees and each representing one of the suits.  When looking at the suits of the cards representing these alternating rulers though it appears that the spades are not represented.  Is this an accident?  Likely not!

Seeing that the 9 hearts and 7 diamonds are both red, my guidance is that the 2 hearts plays a double role here.  When considering our destiny we know that Jupiter rules heaven and Pluto rules the underworld, where heaven represents our transcendental self and the underworld represents our subconscious self.  Mercury plays the role as our guide, allowing us to mingle with either realm.  Essentially Mercury provides us the opportunity to evolve through his position as guide, though it is up to us individually to do the work required to integrate with the totality of our being.

Integration with the realm of heaven is possible through the earnest desire and effort to know creator.  However, heaven can only be realized when the experience is grounded in the earth.  Thus, the actual work entails descending to the realm of Pluto.  To create a proper ground, Pluto has a throne built for each individual in direct reflection of their life choices.  By sitting on the seat of Pluto we connect the 'below' with the 'above'.  We have a commanding view over just how we caused all of our troubles due to our past choices.  In most cases this is an uncomfortable situation.  The throne of Pluto is a hot-seat that doesn't quit...actually its on fire.  It's infinite.  But we don't perish in this fire because from this perspective we are already dead.  Thus, the thought of that throne is usually enough to turn us away from our seeking.  However, evolution is a process and even a little movement can prove beneficial.  The entire process of evolution requires that we walk the stairway from the underworld to heaven, essentially from the ace of hearts to the king of spades.  We must walk in each others shoes to become realized!  When regarding Pluto 's throne, the solution to our discomfort almost always requires forgiveness of some sort.  Like at our life review upon death, we become the judge, the jury and the one accused.  Having offered forgiveness in the past is our saving grace