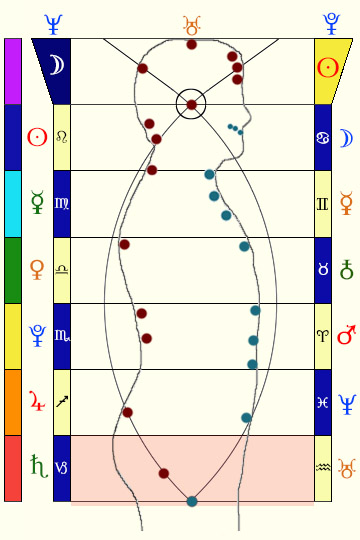 1st Chakra - The Events; The Individual

The 1st chakra marks the dividing of the firmament, the manifestation of Heaven and Earth.

Saturn rules in Capricorn by night as the Rising event draws the energy from the Earth to bring forth karmic events necessary for the proper evolution of the individual Soul.  Uranus rules in Aquarius by day, acting magnetically to align with the sky (Shiva) to rarify the seed of the new Christos (christos seed).   That seed ultimately gets planted into the Earth (Shakti) at the next Soul incarnation.  Therefore, Uranus, as it works through the Moon channel, represents the 'prodigal son' as it carves out its path back to the heavenly kingdom.

Throughout life, Uranus takes the task of infusing the moment with creative expressions to allow Saturn opportunities of breaking down the patterned karmic responses that represent diversions from the original plan.  Since Uranus works in the 1st chakra through the Moon channel, the work perceived is through reflection as to the realignment of the karmic patterns present in the current seed (Shakti Rising), to that of the perfected christos seed revealed in Uranus as Shiva.