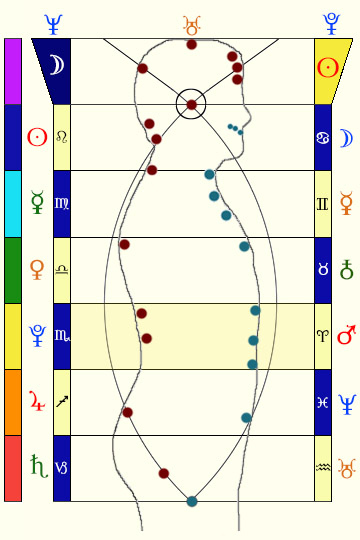 3rd Chakra - The Manifestation of Mind

The 3rd chakra represents a continuum of conscious/super-conscious mind.  At the most subtle aspect, Pluto rules in Scorpio as the abstract, higher mind (super-conscious).  At the most base or concrete aspect, Mars rules in Aries as the rational, lower mind.  Ego is a reflection of the level of 3rd chakra mind functioning in the individual.  Typically, the concrete aspect of the mind will crystallize attention to the lower mind specifically.  However, through meditation and alignment with the original desire, the super-conscious aspect of the mind awakens and broadens the field reflected through the Ego.  Ultimately, there are 3 aspects of the mind, the most subtle being the subconscious mind that has been separated from the 3rd chakra reality and now resides in the 2nd chakra ruled by Neptune in Pisces.

Pluto rules in Scorpio by night as the Rising event draws subconscious mind (desire) from the 2nd chakra.  Pluto acts magnetically to the subconscious desire (Neptune) and outpictures abstract 3D images relative to the individual intention (Saturn).  This phenomena acts like a looking glass through which Mars cognizes and crystallizes the eventual 3D reality experienced by Ego.

Mars rules in Aries by day, responding magnetically to the moment by outpicturing concrete 3D imagery as the experience of Ego.  As if by command, Mars acts impulsively as a response to the directives issued by Uranus as it breaks down the patterned responses crystallized by Saturn.  Pluto manifests the abstract 3D components that Mars arranges into a 3D reality stream.  As the aspect of the higher mind, Pluto draws together the appropriate elemental components that best balance the lower desire with the original desire to incarnate, thus etching the created seed towards its perfected state.  In this, the will resident in the original seed (intention) is activated and provides the source of inspiration necessary for the Ego to evolve in the face of challenging circumstances.