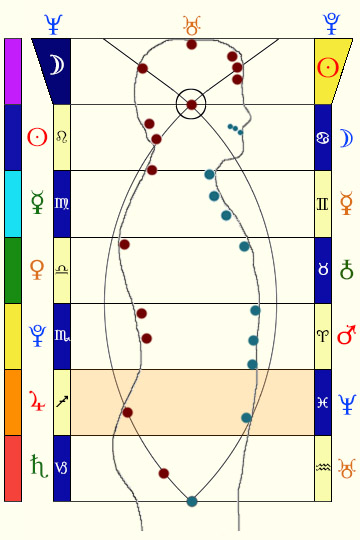 2nd Chakra - The Expression of Gender

Neptune represents the ocean of sensuality as it rules in Pisces by night.  Acting in response to the Moon channel, Neptune is in its power as it releases the karmic bonds between characters and events in the pool of karma, while the Jupiterian projection Rising in Sagittarius through the day force creates new realities by building new patterns of alignment.  As a direct reflection of these planets operating in their full power, the expression of sexuality becomes the prominent paradigm associated with this chakra.

Jupiter rules in Sagittarius by day as the Rising event draws together the characters in life that align to the karmic pattern reflected in the seed.  Jupiter works to extend the revelation of those events and experiences drawn forth and crystallized by Saturn, uniting the character references into a generalized cohesive whole.  Neptune rules in Pisces by night, laying down the abstract formulations that ultimately represent the integral connections that the individual characters in life have regarding each other and as an outpicturing of the karmic patterns present in the seed.

Here, Neptune plays the cosmic alchemist providing the raw materials for Jupiter, the Individual alchemist, to reorganize the patterned crystallizations of Saturn broken down by Uranus.  As a result, Neptune plays the cosmic feminine, absolving subconscious thought forms (karmic patterns stored in the seed) crystallized by Saturn.  Jupiter plays the cosmic masculine by taking the action of uniting the individual characters and events, released from crystallized form by Uranus and absolved by Neptune.  This creates the moment as a new pattern of alignment.