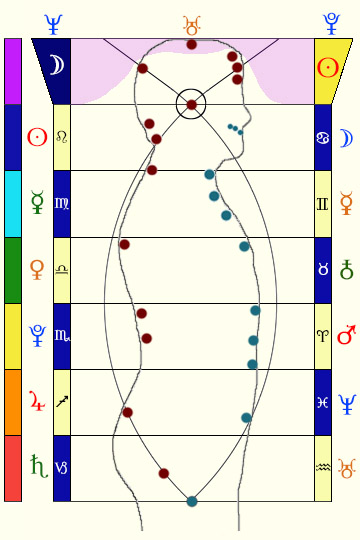 7th Chakra - The One

The 7th chakra represents the act of creation as the single point of unity (1) manifesting in the field of all possibility (0).  Within its undifferentiated form, the (1) holds within it the framework of the 3 resident tones (or cosmic rays) that outpicture as the 3 outer planets of Uranus (ray of wisdom), Neptune (ray of love) and Pluto (ray of life).  Central to these 3 planets, and ambassador of the overall tone, is Neptune as it holds the vibration of love, a direct reflection of the Divine Love that operates throughout the universe.  Neptune operates in the Pineal gland as it splits the 1 Vibration into the 3 rays of light perceptible to the Cherub that manifests in the Heart.

In the manifestation of light, Pluto acts as the ray of life and operates as the father, bearing the seed of the Soul incarnation as it governs the 7th chakra by day.   The seed itself represents the field of all possibility available to the incarnating Soul, and is thus represented as zero (0).  When the seed of the father (Pluto) impregnates the field of the mother (Neptune) it represents the birth event for the incarnating Soul (Uranus) acting as the created one.  Here Pluto acts  as the ambassador of the universal masculine polarity, just as Neptune acts as the ambassador of the universal feminine polarity.  Neptune acts as the ray of love and operates as the mother, providing the space within which the seed evolves through time while it governs the 7th chakra by night.  Uranus acts as the messenger of the cosmos and is indicative of the act of creation, and our requirement to create due to our position in the realm of choice.  Ultimately Uranus represents the channel through which the Cherub contacts Divine Love, as the universal polarities of masculine and feminine unite to magnetically draw the created one (Cherub) back to Itself.

The Soul pushes out its birth request at the instant of the first breath in the realm of 3D reality as an expression of its desire to align more fully with Creator.  This sound vibration issues from the Throat Chakra and represents the Soul's intention to incarnate.  From that point forward, the Cherub in the Heart is responsible for the actions that manifest in response to the movement of Ego through time.  At the moment of the last breath, the Cherub recedes into the Soul as the life review plays back the expression of that being in time.  Here the Soul then becomes responsible for the 3D manifestations that occurred throughout Life.  In other words, "by your deeds shall you be known".