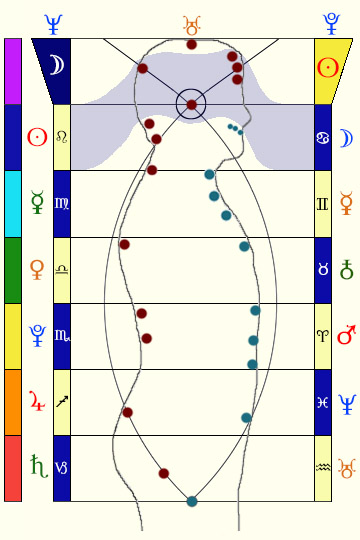 The 6th chakra manifests the 3rd Eye in response to the uniting of the 3 rays of Divine Light in The Brow.  The 3 rays represent both the 3 colors of light that are received through the 3 Forehead chakras as well as the differentiation of the 3 primary colors of 3D reality that are filtered through the Back of Head chakra.

As a manifestation of holographic form, the separation of the 3D reality of form becomes fluid in the Brow as it adjusts under the influence of the 3 rays of Divine Light illuminating the space.  Thus, the 3rd Eye represents another feedback mechanism that works in the body to expose 3D expressions that are misaligned with the light expression of the original desire to incarnate.

The Sun rules in Leo by day as the expression of the choices made in life by the Ego.  As the life force moves up the back of the body (governor channel), the Back of Head chakra separates the manifestation of 3D reality into its component primary colors and directs them to the central Brow where they dance with the 3 rays of light.  The dance of color and the dance of light operate simultaneously offering the individual the opportunity for correcting deficiencies in the Soul movement.  Essentially the Soul's original intention to incarnate holds within it the will necessary to accomplish the task of attaining the evolutionary state represented by the original desire.  The created seed represents the evolution of the Soul due to the will of the Ego in the 3rd chakra.  Thus, the dance of color represents the created seed expression as it draws upon the light of the solar expression of the 3rd Eye.

The Moon rules in Cancer by night as the faculty that presents the holographic image of the original desire to incarnate in the Brow.  The 3 rays of light are first separated from the Divine Light, then focused on the brow to form a holographic image describing the Soul's original desire to incarnate.   This imprint acts as a backdrop and outpictures as the dance of shiva in the Mind's Eye.

As the Soul evolves through life, momentary choices create the concrete 3D reality.  As the movement of this consciousness rises up the governor channel, it gets directed to the Brow chakra giving the individual the opportunity of seeing conditions in the current reality that are not aligned with the original desire.  Thus, in the Brow there is a feedback mechanism in place designed to awaken the Soul to the proper movement through the time/space continuum.